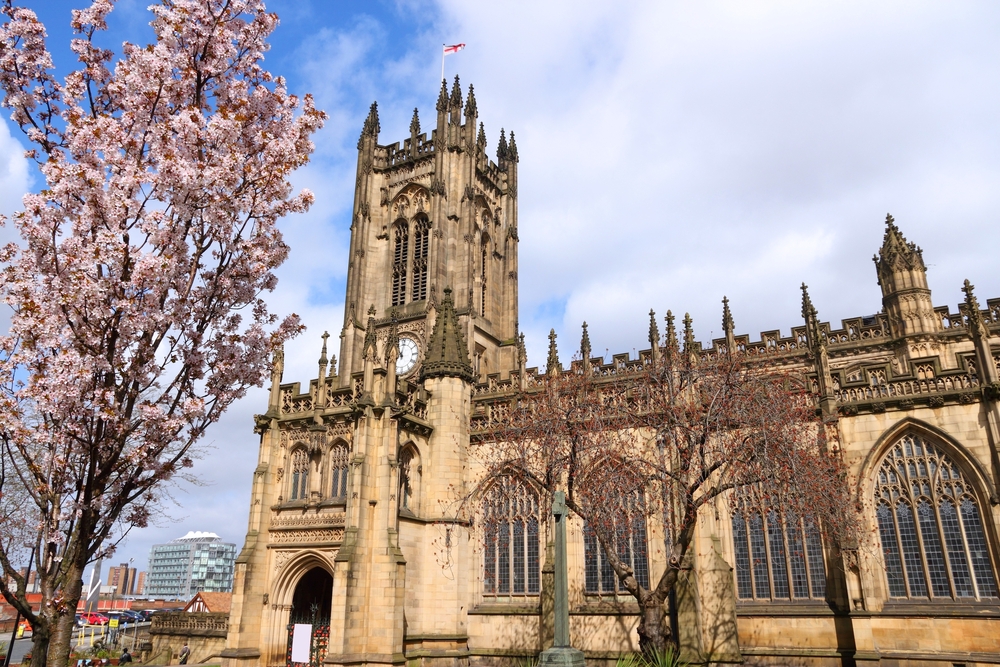 4 of The Oldest Historical Sites in Manchester

We previously touched on some of the oldest historical buildings and landmarks of Liverpool, but this time we wanted to delve into some of the fascinating historical places in Manchester.

Those who decide to study English by enrolling at our English Language School in the city will have plenty of places to discover, as Manchester is brimming with many fascinating historical locations. The city has such a rich, varied and vibrant past that it’s no wonder there are so many spectacular historical sites to see.

So, with this in mind, we wanted to go through 4 of our favourite historical hotspots in Manchester, which also happen to be some of the oldest in the city…

With a history that can be traced all the way back to the 7th century, the Manchester Cathedral is one of the most impressive and oldest buildings in Manchester city. It’s one of 15 Grade 1 listed buildings, having been established since 1847.

It has been preserved with careful restoration over the years and even survived significant damage during World War II. The building and its beautiful grounds are open to the public for the majority of the year, and it also plays host to a few orchestras and contemporary music performances.

Our next example isn’t a building, but an area of the city known as Castlefield, which is steeped in history, and even marks the place where the Manchester we now know, first began. The whole conservation area was originally the site of an actual Roman fort, erected in around 79 AD.

The Roman General Gnaeus Julius Agricola oversaw the building of the fort and settlement, which was named Mamucium or Mancunium, an early name for was to become Manchester. Reconstructed remnants of the fort can still be seen in Castlefield today, and they serve as a reminder of the city’s Roman beginnings. One of the oldest historical places in Manchester, it is also the world’s first passenger railway and industrial canal both originated in this area.

Ordsall Hall is an impressive Grade 1 listed Tudor manor house, which can still be found in on Ordsall Lane in Salford. The building has a rich history, dating back over 700 years, and even carries the reputation of being one of Greater Manchester’s most haunted places. It was served as a home to the Radclyffe family, who resided at the property for 3 centuries. There’s even a   local legend that the Gunpowder Plot of 1605 was planned in the manor.

Those studying English who have a desire to learn more about history will find Ordsall Hall very inviting. The oldest house in Manchester frequently open to visitors and plays host to various exhibitions and events, plus guests can take part in walking tours. There’s even the possibility of spending the night at the hall, for some ghost hunting.

The stunning English country house and garden is situated in the district of Trafford, Greater Manchester. Dunham Massey Hall itself is Grade 1 listed and was the former home of the last Earl of Stamford. The grounds are littered with various historical features, from a Victorian Bank House to an Elizabethan Mount.

Since 1976, the National Trust has owned the idyllic house and grounds and has opened them up to visitors all year round. For any wildlife lovers, the gardens are sure to satisfy, as fallow deer, owls, woodpeckers and more can be spotted as you stroll through the greenery. One of the most historical places in Manchester, it is often a range of activities for visitors to take part in, from historical tours to art in the garden.

If you’re considering enrolling on an English speaking course in Manchester, there will be plenty of history to explore in what is one of the best student cities in the UK.

So if you want to study English in Manchester, then apply to study at NCG today – or contact us to find out more.