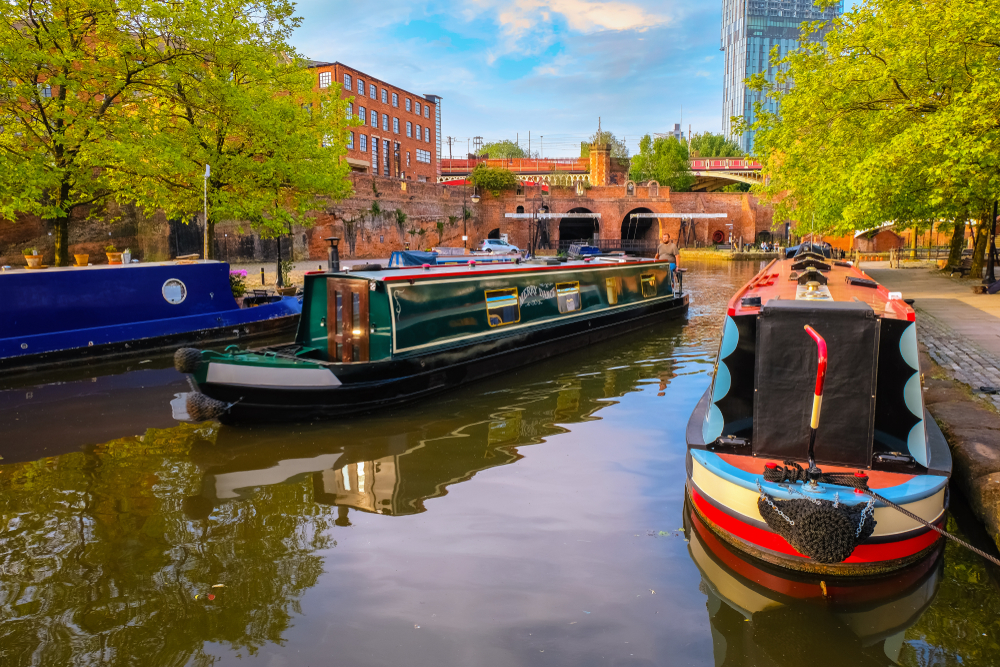 A Brief History of Manchester

Are you wanting to study English in Manchester? Then you can, by enrolling at our English Language School in the city. Manchester is a hugely popular destination for students from all over the world and is renowned for its rich history and eclectic mix of cultures and influences.

Over many years the city has grown from an industrial metropolis to the digital hub of the north it is today. It’s also been the home of many of the nation’s most impressive, creative and scientific endeavours.

The past of this progressive city is well worth exploring and before you arrive, we wanted to give you a brief history of Manchester…

The first tangible evidence of human settlement in the area can be traced all the way back to the time of the Roman occupation of Britain from 43 AD until around 410 AD. Around 70 AD, the Roman General Gnaeus Julius Agricola oversaw the building of a fort in a naturally defensible position, where the rivers Medlock and Irwell meet.

It’s understood that Manchester derived its name from this 1st century-settlement and fort, which was named Mamucium. It was the Romans first line of defence against the roving tribes of Celts north of the border.

In the centuries that followed, the settlement ended up in the territory of several different kingdoms, including the Saxons. This persisted to the invasion of the Normans and the Harrying of the North.

The reconstructed remnants of the fort can still be visited today as part of the Castlefield Urban Heritage Park.

Skipping ahead to the late 13th century and the Manchester, which is recognised today, slowly began to appear. A fortified manor house had been erected by the barons Grelleys or Gresles, and medieval Manchester was centred on it. The land around the manor was leased to tenants, for houses, workshops and gardens.

By this time Manchester had already become a market town, benefitting from its location along the northern river system. There had been an influx of many skilled workers, from stonemasons to carpenters, and the settlement even gained the right to hold an annual fair in the spot now known as St Ann’s Square.

The textile trade and the arrival of Flemish weavers to Manchester helped the town to slowly become an important centre for textiles and linen production. A tradition of cloth production was developed throughout the region. Due to this the small market town began to grow and continued to prosper, despite the setbacks of the English Civil War.

Manchester remained a market town for the manufacturing of cotton and woollens. By the late 18th century, the humble town would continue to grow into a bustling, roaring, powerhouse thanks to the coming of the Industrial Revolution.

The cotton industry thrived under industrialisation and thanks to the fast-flowing rivers from the Pennines, Manchester was the perfect location for the construction of water-powered, steam-driven cotton mills.

Expansion continued at an exponential rate, with the importing of cotton from Manchester through the port of Liverpool, revolutionising the textile industry in the area. Cotton mills spread rapidly throughout Manchester and the surrounding towns. By the 19th century, Manchester grew into one of the largest industrialised cities on Earth, it was even dubbed “Cottonopolis.”

By 1912, the cotton industry eventually reached its peak, but disaster followed for the industry in Manchester following the outbreak of the First World War.

One of The First Telephone Exchanges

Manchester was also home to possibly the first telephone exchange in the UK, but certainly one of the first in Europe.

Using the Bell patent system, a telephone exchange was opened on Faulkner Street in 1879, and subscribers continued to grow in the coming years. Growing to around two hundred operators, it remained the largest telephone exchange outside of London in Edwardian times.

From the 1930s onwards the population of Manchester, which had been increasing for some time, started to see a continuous decline. The textile industry also went into steep decline, following the increased foreign competition combined with the Great Depression of the 1930s.

Manchester suffered heavily during the Blitz in 1940 to 1941, due to the fact that the city played a key role in manufacturing aircraft for the RAF.

As a result of economic restructuring the cotton industry eventually became completely obsolete by the 1980s, the old mills were left empty and the chimneys turned cold.

However, Manchester’s economy started to rise in the 80s and 90s thanks to its emergence as a football superpower and its thriving music scene. The worldwide popularity of Manchester United F.C exploded during this time, and a creative music industry continued to prosper thanks to institutions such as Factory Records and Fac 51 Hacienda.

Manchester was devastated by the explosion of an IRA bomb that was detonated in the city centre, on the 15th June 1996. Thankfully the immediate area had already been largely evacuated due to previous warnings, so although more than two hundred were injured in the blast, there were no fatalities.

The aftermath of the explosion leads to a large scale regeneration project of the city, which continued for the next ten years. Complex renovations, such as the Printworks and the Triangle created new focal points for shopping and entertainment in the city. When the renovation of Manchester Arndale was finished in 2006, it was given the title of the UK’s largest city centre shopping mall.

In the years since the bomb blast, Manchester has been transformed into a cultural, digital and creative capital in the UK, thanks to extensive funding from both the public and private sectors.

From designer retailers, to contemporary apartments and international companies the city has truly become a thriving centre of investment, connectivity, and inspiration.

Manchester is now the second largest media and digital hub in Europe, thanks to the development of MediaCityUK, which is home to the likes of the BBC and ITV.

It feels as though the boom years of the Industrial Revolution have returned, under a 21st-century guise. Manchester is once again a city on the rise.

If you’re looking to study English on our English language course in Manchester, you won’t be disappointed when you relocate to this ever-evolving city of innovation, perseverance and excellence.