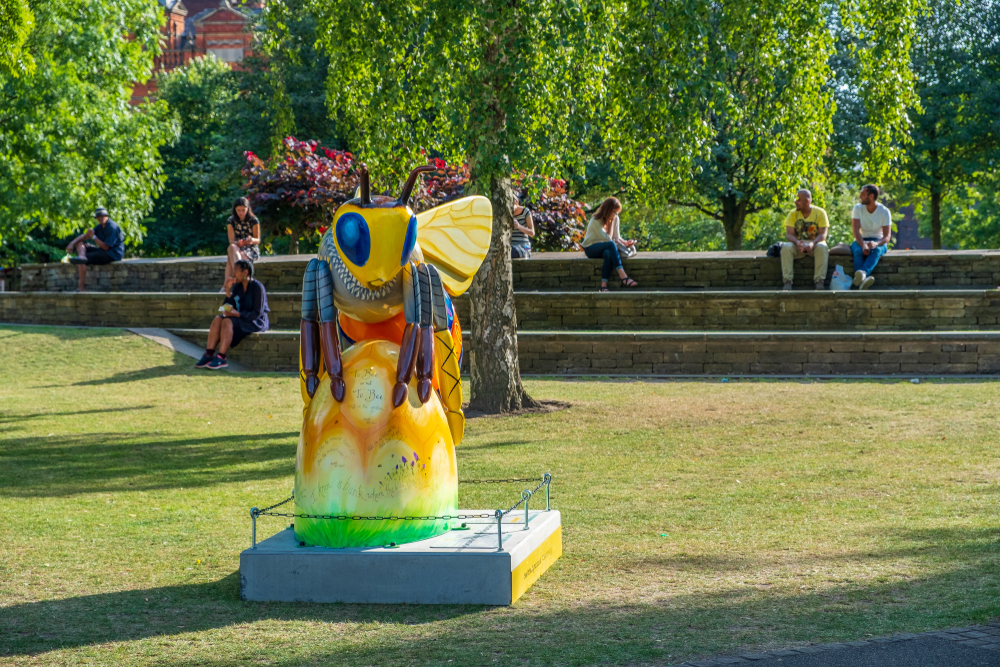 If you’re looking to study English on our English language course in Manchester, you’ll never get tired of the seemingly endless excited events that the city has to offer. If you’ve already enrolled as a student at our English Language School in Manchester, you’re no doubt already aware of the Bee in the City event.

Since late July, the creative colony of giant Bee sculptures have hit the streets, and it’s safe to say that they’ve remained the biggest buzz around town. Bee in the City is one of the largest public art events the city has ever witnessed, which isn’t too shab-bee. (Sorry we couldn’t resist.)

Anyway, here’s everything you need to know about the Bee in the City event in Manchester…

First, what’s the bee all about?

The iconic worker bee has been the symbol of the city since the days of the Industrial Revolution. It represented the city becoming a ‘hive of activity’ in the 19th century, with every Mancunian working hard to bring about industrial change. In 1842, the now iconic Manchester worker bee officially became part of the city’s coat of arms.

These days the worker bee symbol can be seen in detail in various spots throughout the city, from the magnificent mosaics on the Town Hall floor, to the clock face of the Palace Hotel.

The bee has also now become a symbol of unity since the Manchester Arena attack. Those who take a trip to Stevenson Square will see the beautiful bees and heart montage art piece, and there’s even a giant mural featuring 22 bees in the Northern Quarter, in memory of the 22 people who died in the atrocity.

A stunning sight to bee-hold

Bee in the City began in Manchester on the 23rd of July, with a series of spectacular sculptures in the shape of giant bees invading the streets of the city. The huge public art event has come about thanks to Wild in Art and the Manchester City Council, and aims to bring all the different communities in the city together.

Over 100 decorative, super-sized bee sculptures are now waiting to be discovered, after being placed throughout Manchester, many of them near iconic landmarks and close to some of the city’s hidden gems.

Each of the brilliant bee sculptures is unique, having been designed by different artists and members of community groups. They aim to help people celebrate and appreciate the unique achievements and creative brilliance of Manchester. Drawing attention to the city’s industrial heritage and vibrant music scene.

It’s truly an inspirational artistic undertaking that gives everyone in Manchester the chance to take part, offering weeks of fun, fascination, and striking spectacle. As well as the 100 giant sculptures, the Bee in the City Learning Programme has also helped with the creation of over 130 little bees.

The creative clusters of little bees are hidden in museums, libraries, shopping centres and more in Manchester. It’s the perfect excuse for everyone to get out, see some sights and get a good dose of vitamin Bee! (Again, we’re sorry). They’ll explore areas of the city that perhaps they’ve never been to before, all while taking in the amazing architecture and cultural heritage of Manchester.

You can see the trail here.

From the 12th to the 14th October, a special farewell weekend event will mark the end of the bee trial in Manchester. All the sculptures will be brought together for the event, which will give people a last chance to take in the wonderful works of art. Also, some of the artists responsible for the bees will be in attendance for a meet and greet.

Finally the artistic insects will take to the stage, in a grand glittering auction on the 17th October. The auction will be designed to raise significant funds for various local charitable causes, for the The Lord Mayor of Manchester’s Charity Appeal Trust. Although it’ll be sad to say goodbye to the bees, the funds raised will all go towards supporting communities and improving the lives of many people in the city.

It’s not too late to be part of the Bee in the City event in Manchester, and you can take part in this and many other exciting events in the city while you study English at our English Language School.

You can Apply to study at NCG today – or simply contact us to find out more.