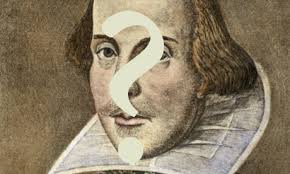 In our most recent Shakespeare Week blog post, we paid tribute to just some of the words and phrases invented by Shakespeare. The man was a linguistic mastermind and his artistic influence is still hugely prevalent in the modern English language.

The problem with William Shakespeare being so linguistically innovative, however, is that we cannot always decipher exactly what he was intending to express. Much of this mystery could be attributed to his poetic license and intention to add complex and ambiguous dimensions to his work. In other instances, his original wording is so obscure that even to this day it continues to baffle actors, editors, directors and students alike.

from All’s Well That Ends Well

When Helena’s egotistical French husband, Bertram, walks away after flirting with a young maid, Diana, the girl despairingly mumbles “Frenchmen are so braid”.

The use of braid in this context remains unclear. Samuel Johnson, an influential contributor to the English language suggested that ‘braid’ describes deceit; in which case it could stem from the old Scot word bradie, to mean crafty and cunning. Some suggest Diana was insinuating that Frenchmen are tight and twisted like a braid of hair. Others have interpreted braid in the sense of decorative trim or brocade, implying he is all show and no substance.

from Antony and Cleopatra

Shakespeare regularly adopted nouns and adjectives and reused them to function as verbs. Some believe this process, known as verbing, is evident in Act four of Antony and Cleopatra.

Cleopatra speaks of Marc Antony’s wife, Octavia as “demuring upon” her “with her modest eyes”. Demuring may stem from the adjective demure to mean ‘look demurely’ or ‘with affected modesty’ at her, as explained by Samuel Johnson to imply it is a patronising attempt to keep the peace.

Other linguists claim that Shakespeare has in fact misspelled the Elizabethan verb demur to imply ‘hesitant’ or ‘uncertain’; and so Cleopatra is inferring that Octavia looked at her with a doubting gaze.

from Measure for Measure

Following Isabella’s brother, Claudio, being sentenced to death by Lord Angelo, she pleads for his innocence in a lengthy proposal, which discusses the many imperfections of men. Isabella refers to the ways in which Mankind’s “glassy essence” plays fantastic tricks.

Essence clearly refers to character but ‘glassy’ raises some questions. Some say it could mean ‘breakable’ like glass, others think it could entail ‘transparent’ as in unable to hide true feelings. “Glassy” could also describe a ‘reflective’ nature as in the property of a mirror.

In Elizabethan dialect, ‘nothing’ was a homonym (sound-alike word) with ‘noting’; and so, there are four possible meanings:

Each of these individual themes are prevalent throughout the play, and so the story is indeed Much Ado About Nothing.