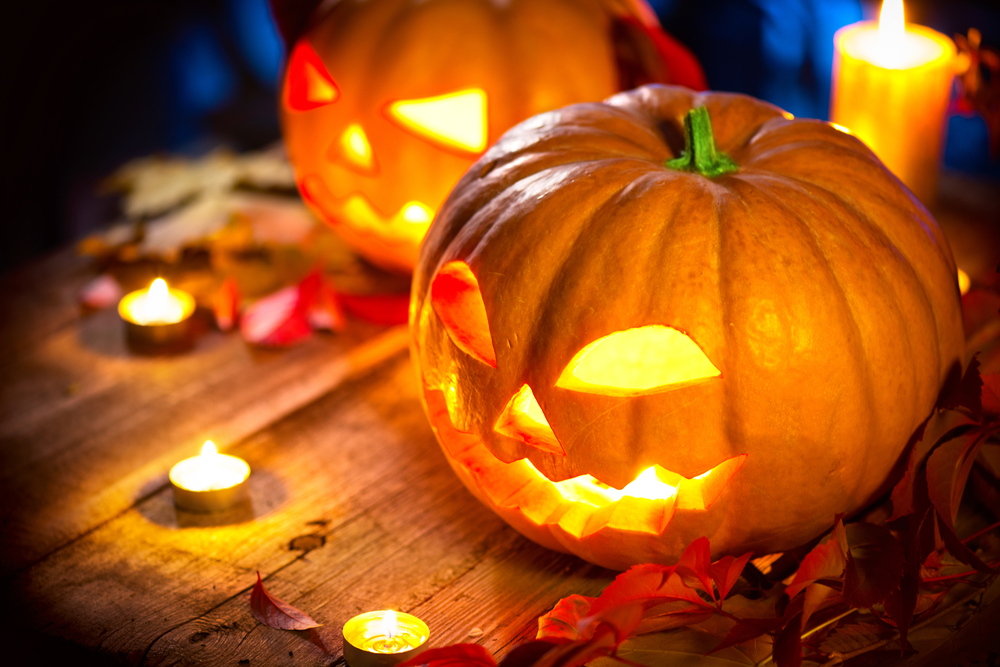 It’s the home of our English Language School and an absolutely ideal place to study English. And this month the magnificent city of Manchester will be taken over by ghosts and ghouls as Halloween draws near.

All Hallows’ Eve isn’t technically until 31st of October, but the spooky season will be in full flow throughout the whole month, with plenty of frighteningly fun events and horror-themed nights.

From hordes of zombies to terrifying horror film reenactments, there will be loads of scary sights to see as you study English in Manchester over the Halloween period. So without further ado, here are some of the best…

Fancy watching a frightening film in a swimming pool? Don’t worry there won’t be any water involved, as the historic Victoria Baths would’ve have been fully drained in preparation for The Village Screen.

The pop-up cinema will be taking over the building during Halloween to screen a  series of scary films over three nights. Including, The Lost Boys, The Witches and Steven Spielberg’s iconic, Jaws, which is admittedly would be pretty tense to watch in a pool. Also, there will be street food available, a pop-up bar, and even a DJ who will be spinning some Halloween classics.

A city-wide celebration of all things spooky will spread throughout Manchester with the spectacular Halloween in the City event. Before you know it, you’ll be seeing enormous creepy monsters, streets decorated with pumpkins, shops and other buildings lit up with a ghoulish green glow.

The whole of Manchester city centre will be embracing the scary season, thanks to the combined efforts of Manchester’s Business Improvement District. Plus, there will even be a tantalising trick or treat trail, along with a dog fancy dress competition!

Disquiet at the Brickworks – 28th Oct

If you’re into ghost stories, then this Halloween you can take the opportunity to enjoy some spine tingling tales in the creepy underground chambers below Manchester’s busy streets.

Naked Productions will be presenting Disquiet at Brickworks, on Sunday the 28th October, and guests will be treated to an evening full of spine-chilling storytelling and ghostly whispers in the dark. The series of underground tunnels and rooms that make up Brickworks can be pretty unsettling anyway, so adding some spooky audio into the mix is sure to give you goosebumps.

For fans of horror there’s another big event happening in Manchester this Halloween that’s sure to satisfy. Monopoly Events are presenting their new concept, For the Love of Horror at the Bowlers Exhibition Centre, which is a mix between a scare attraction and a fan convention

The event will have various scare zones, which allow guests to run into iconic horror characters, from Freddy Krueger to Pennywise the Clown, and take part in terrifying experiences like The Walking Dead. A Zombie Outbreak zone lets you pick up an airsoft gun as you try to survive. Renowned horror film actors and authors will hold Q&As, and there will even be a re-enactment of Michael Jackson’s Thriller video.

For the last few years, this more glamorous and celebrity packed Halloween night has been held in Manchester, and this year it will be coming to the basement of the luxury Abode Hotel. The Mirror Ball’s Halloween spooktacular will have live DJs, with plenty of dancing and drinks.

Every single penny that’s raised from the event goes straight to the Forever Manchester charity, which aims to support communities across the whole of Greater Manchester. Fancy dress is an absolute must for this, as you won’t be allowed entry otherwise. However, there will be a prize for the best dressed.

There’s plenty more frightful delights and spooky themed attractions happening this Halloween across the city. So if you’re on our English language course in Manchester, you’ll get the chance to experience whatever bit of frightful fun takes your fancy.

Manchester really is a great location to study English, as the colourful and vibrant city always has something extra to offer! Take a look at our English speaking course today, and if you’ve already got your eye on some exciting Halloween events, then let us know on our Facebook and Twitter pages.